You Will Get A Loan Of Rs. 1 Lakh At An Interest Rate Of 2% : CM Vijaybhai Rupani

The delineation between system software such as and application software is not exact, however, and is occasionally the object of controversy. For example, one of the key questions in the trial was whether Microsoft’s was part of its operating system or a separable piece of application software.

Atmanirbhar Gujarat Sahay Yojna: The Gujarat government on Thursday announced a scheme under which people in lower middle income group can avail guarantee-free loan of Rs 1 lakh from banks at 2 per cent annual interest as it seeks to help them get back to normal life disrupted by the COVID-19 lockdown.

The government will pay another 6 per cent interest to banks giving loan under the scheme, Atmanirbhar Gujarat Sahay Yojna (AGSY), targetted at small businessmen and a cross- section of people falling under the lower middle income group.

According to scheme norms, while the tenure of loan will be three years, payment of installments will begin only after six months of disbursal.

On the lines of #AtmaNirbharBharatAbhiyaan, CM Shri @vijayrupanibjp announces ‘Atmanirbhar Gujarat Sahay Yojana’ for the benefit of over 1 million lockdown-hit small traders, hawkers, skilled workers and a cross-section of people falling under the lower middle income group. 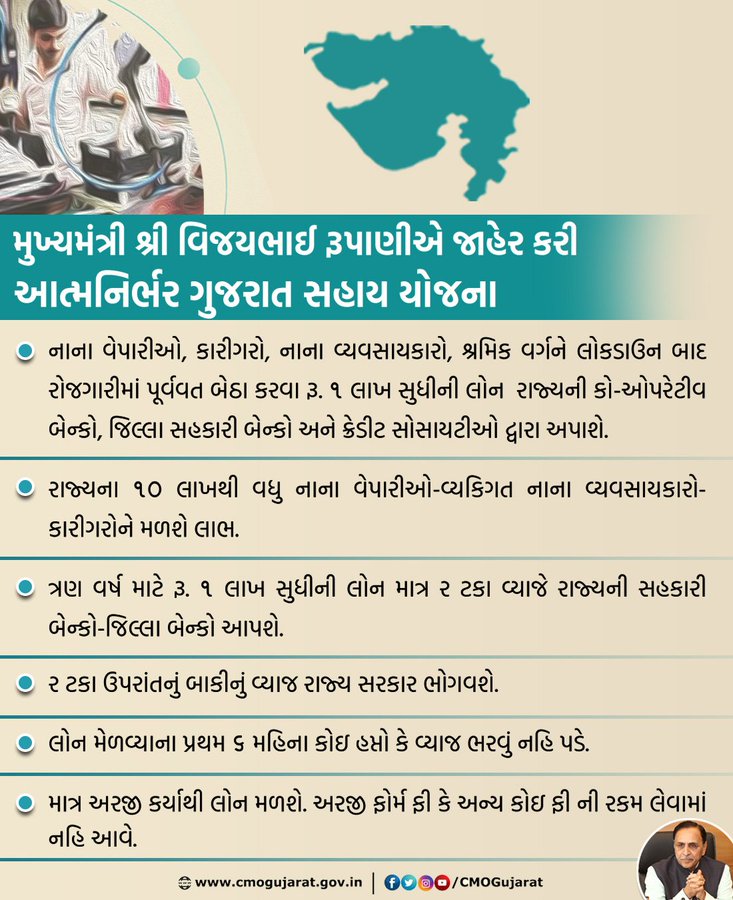 524 people are talking about this

Other states have declared assistance of Rs 5,000 or so to such people. However, we are of the opinion that such a small amount will not bring their life back to normal, he
said.

“Around 10 lakh such people will be given loan of Rs 1 lakh each from banks at just 2 per cent annual interest to start their lives afresh, Rupani said.

Loans will be provided on the basis of application where no guarantee will be required, he said.

The state government will pay the remaining 6 per cent interest on loan to banks. The tenure of such loans will be three years. Re-payment of principal and interest will start after six months of sanction, he said.

The government has come up with this scheme after discussion with district, scheduled and cooperative banks, the chief minister said.

The state government will come out with detailed information on AGSY in a few days and loan will be made available to all those who are in need of it, he said.

Join Our Whatsapp Group to Get Latest Updates... : Click Here

General Study Book In Gujarati : All in One of Angel Academy (643 Pages)